Where Have You Gone Dom DiMaggio?

I've dabbled over the years in researching the Baseball issues Topps licensed and/or printed from 1959-68 in Venezuela but even with a lot of digging not much information is available.  One large bit of information I overlooked though, relates to distribution of Topps baseball cards prior to 1959.  I warn you, some foreknowledge of the subject is helpful as you read along.

Thanks to Friend o' the Archive Josh Alpert, who is the king of all that is Venezuelan Topps, I was redirected to an ad from the January 16, 1987 issue of Sports Collectors Digest that had all sorts of interesting things going on: 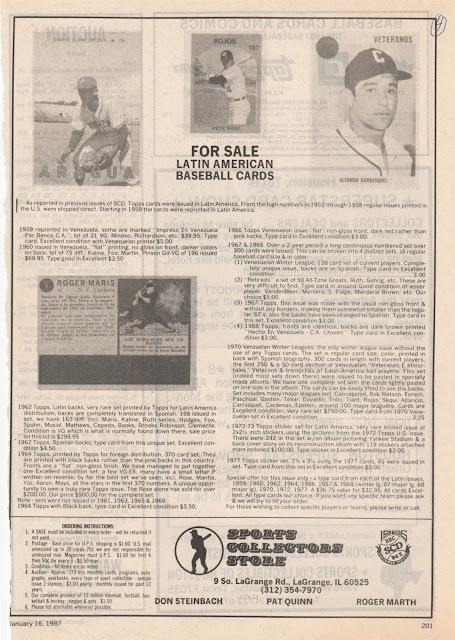 Pat Quinn of the Sports Collectors Store, along with the now infamous Bill Mastro and later John Rumierz, were among the earliest dealers to undertake buying trips in Venezuela.  This probably took some nerve but it opened up an important pipeline for the hobby. The relevant portion of the ad, at least today, is not the great stuff for sale but rather the preamble:

While I'm particularly interested in the 1952 high number distribution, the big takeaway is how Topps was getting rid of some excess stock and returns for most of the 1950's.  Venezuela was (and is) baseball mad and the fact their Winter League season began a little after the end of the MLB season each year before a January tournament-style to crown a champion occurred, was a happy little development I'm sure when it came time for the excess Topps baseball cards to be dumped.

A Bill Mastro article from the January 17, 1986 issue of SCD actually predates the ad above but has a very interesting little tidbit: 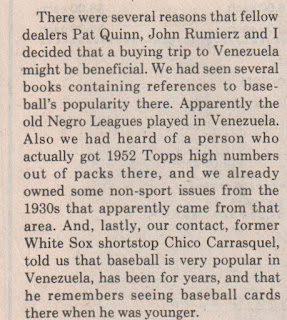 I didn't reprint it but Mastro states some of the albums produced to house the cards beginning in 1964 were made by Topps. The 1964 and 1966 versions seem to be the most likely candidates as their covers feature the Rookie Team trophy and the 66 cover in particular seems to mimic the advertising for that set in the US. Here, take a look at the 1966 album and then a Topps wax box from the US: 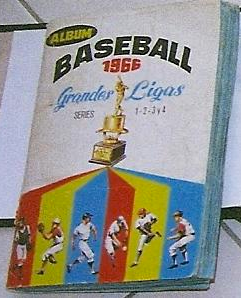 Topps would have had to have a hand in the design of the Venezuelan album, don't you think?

Back to our blurb. The ultimate fate of the 1952 high numbers seems to be a bit of a mixed bag.  Sy Berger of course alleged a garbage scow dumped all remaining stock in the Atlantic Bight in 1960 following years of effort to unload them on "carnivals"; there's evidence some went to PX stores at US Military bases; and it seems Canada got them on both coasts, with possible leeching in the west down into the Seattle area.  In addition, we have a Venezuelan connection as described above and let's not forget the Card Collectors Company, which seems to have regained their stock of highs (last seen in their 1958 catalogs) starting around 1960, which totally dovetails with the alleged dumping at sea.

The Shorin family was very comfortable dealing with Latin and South American interests due to the family tobacco business founded by their father Morris, first as an individual entrepreneur in the 1890's and following that, for thirty years starting in 1908 as the American Leaf Tobacco Company.

The 1959 Venezuelan cards were printed by Industrias Benco, who are identified on some card backs that year.  Some later issues (although not 1962) show evidence of being printed in the US and the final set of cards issued in 1968 were made by a Venezuelan printer called Litoven.  Any local print work would have been done in Caracas. Benco was acquired by the Beatrice Foods conglomerate in the mid 1960's and they were quite involved in snack foods and confections at the same time the Topps cards were being sold. Beatrice also acquired a distributor in Caracas called Distribuidor Marsanita around the same time.

Some points to ponder:

1) Who printed the Venezuelan cards in the  US in the years after 1959?  I can't believe it was the usual Topps printers of the time (Zabel Brothers, A. Hoen, Chromographic Press, or Stecher-Traung) as they did fairly high quality work and the Vennies are usually not up to snuff when compared to the US issues.

2) What was the relationship between Topps and Litoven?

4) And what of the mysterious 1967 MLB/VWL/Retirado issue that does not conform to the standard look of Topps cards during the Venezuelan run?

6) What kind of idiot carnival owner would agree to take on old baseball cards as prizes anyway?

That last question is relevant specifically to Sy's barge story I think and the Venezuelan Topps story in general.  The Card Collectors Company (which sold off Topps overstock and returns from about 1955 onwards and was first run by Woody Gelman's stepfather Sam Rosen until his death in 1958--when Woody took over), was out of 52 highs by the time their March 1959 catalog came out.  In a July 1958 price list, put out by Rosen, the highs were a dime apiece, compared to three or five cents for the lower numbers. So sometime between 1958 and 1959 Card Collectors Co. ran out of their original 1952 high number stock.

The 1960 ACC, which had Woody Gelman's input on "R" cards, listed the 52 highs at thirty cents apiece. I don't have scans or copies of catalogs from 1960 or 61 but in the March 1, 1962 catalog and through at least early 1968 CCC offered the highs at a dollar apiece in every catalog, vs either ten or fifteen cents for the lows. I find it a big coincidence that the Berger barge dumped the excess 1952 Topps high number inventory just around the time CCC restocked theirs. From what I have seen when it comes to Topps, there are zero coincidences on product that entered either the wholesale or retail distribution chains or the hobby directly.

So let's hope more turns up on Venezuela.  I'm also hoping for more details to be revealed on the operations of Topps in Mexico but that is a ways off as it's even harder to find information on that than it is on their Venezuelan operations.


Regarding the posting of the image of the exotic 1966 Venezuelan "BASEBALL" album, Senor toppcat, muchas gracias!!